When Nancy Sinatra sang “these boots are gonna walk all over you,” perhaps she was describing ashiatsu. This ancient practice—which involves a massage therapist literally walking on your back—has been performed by Buddhist monks for centuries and is now available in various forms across America.

Turning the tables on those who love a good foot massage, ashiatsu asks the feet to return the favor. Meaning “foot” (ashi) “pressure” (atsu), ashiatsu recipients are simply calling this technique “heaven.” And although ashiatsu sessions may appear unconventional, with practitioners often holding on to specially-attached ceiling bars to maintain their balance while walking on a client’s back, this type of bodywork is being heralded as a luxurious, deep-tissue massage. 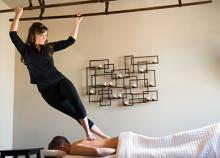 Beginning in the East, ashiatsu’s history spans several continents and more than 3,000 years. Many different styles of barefoot massage have originated from India, Japan, Thailand, China, and the Philippines; some are practiced on a floor mat, others require balancing props, such as ceiling bars, chairs, bamboo rods, poles, and even ropes and chains.

Nevertheless, when ashiatsu was first started, its followers were more interested in “chi,” or energy, than soothing aching muscles. “Asian bodywork is based on Chinese medicine and an energy body map,” explains Barbra Esher, director of education for the American Organization for Bodywork Therapies of Asia (AOBTA) and a certified ashiatsu instructor. “We get a lot of education in Western anatomy and physiology, but our main concern is treating the energetic body. And because of that, a huge amount of our education is in those theories — like yin and yang.”

Ashiatsu is available in the heartland, too. This treatment room belongs to Terry Ritter, owner of Fascia Works in Evansville, Ind. Photo by Rick Giase.

In traditional ashiatsu, “people follow the flow of the yin meridians coming up from the earth and then the yang meridians coming down from the heavens,” Esher says. “How my clients describe the therapy is that it reaches them in a different place — it kind of connects them with this greater whole. There’s a Zen aspect to it.” Read full article